Odyssey, Parenting Your Teen is a group-based programme delivered over eight two hour sessions to groups of parents. It is an evidence based intervention which is universally accessible. Session topics include teenage development, problem solving, rules and consequences and communication. Underpinned by Family Systems Theory it promotes Authoritative Parenting, the style of parenting which has proven to be most effective. 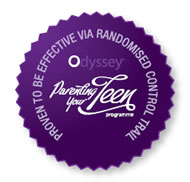 After identifying the need for a programme for parents of teenagers, Parenting NI commissioned The Institute of Childcare Research at Queen’s University Belfast to carry out a Randomised Control Trial (RCT) on the Odyssey, Parenting Your Teen Programme, the most robust measure of testing effectiveness.  During the study the programme was delivered 28 times across Northern Ireland in urban and rural settings to parents from diverse backgrounds.

Randomised Controlled Trail is a study in which a number of similar people are randomly assigned to two (or more) groups to test a specific theory. One group (the experimental group) takes part in the theory being tested; the other (the comparison or control group) takes part at either a later stage or not at all. The groups are followed up to see how effective the programme was. Outcomes are measured at specific times and any difference in response between the groups is assessed statistically. This method is also used to reduce bias.

RCT was chosen for the Odyssey Parenting Your Teen Programme to create two broadly equivalent groups of parents (comparable in known variables such as demographics, family size, religion and in unknown factors), thereby enabling us to attribute changes to the impact of the programme, rather than any systematic differences between the two groups, or other explanations such as the passage of time.

The Randomised Control Trial for the Odyssey, Parenting Your Teen Programme makes it very unique as the only evaluated parenting programme for parents of adolscents in the UK.

A three-year research evaluation on the Programme was carried out in 2010 by the Institute of Childcare Research Queen’s University Belfast, which showed “considerable effectiveness” of the programme, improving parent-teen relationships and the family as a whole.

Parents who participated in the programme were less likely to:

Find out more about the Train the Trainer Course

“There seems to be a gap in the market for parenting programmes aimed at parenting teens.  We receive many calls from distressed parents who are finding the transition to parenting teens difficult where once they were in a position of guidance now becomes a power struggle. The Odyssey programme is aimed at giving parents an understanding of their teenagers and how to restore harmony in their relationship.  It builds up confidence for the parent to seize they’re new role in parenting their teen with new confidence and self-assurance. The programme is compact, concise and satisfies the need.”  Leanne, Trim Family Resource Centre.